I’ve added a few more tunes to my tunes page. Most of these are tunes that were commissioned through the Old Blind Dogs Pledgemusic campaign. Some lovely people commissioned these tunes, helping us fund our latest album, Room with a View. You can check this out at…..https://www.oldblinddogs.co.uk

There is also one very special tune I’ve added. This is a tune, which i only found last year, that was written by my Great, Great Grandfather, Pipe Major Donald Kennedy. Posting this tune is bittersweet for me. Over the last 3/4 years I’ve been slowly finding out little bits about Donald. It’s a bizarre experience for me. A lot of musicians on the folk scene are brought into playing music through the connections that they share with their ancestors. Music is generally passed on, and nurtured through the generations. I didn’t have this connection. Which makes my choice to play the pipes at such a young age, even more weird. Id like to think that this musical connection between my GG Grandfather, and myself, was sub conscious, that he gifted me this without me knowing. It also makes me think a lot of my Grandfather, who a year ago passed away. He was the one who really encouraged me to follow my heart, and who nurtured my fascination with the Bagpipes. I was propelled on to find out more about Donald as it became a great subject of conversation between myself, and my Grandad. The sad thing about this is that it turns out that his 1913 Henderson pipes, and a lot of his music were taken by my Grandfathers cousins. They were aware that i was learning to play the pipes, and yet they chose to take all of his belongings. I have since found out that these Pipes were sold in Perth at an auction in 2005. Strangely, the pipes were sold by my Grandad’s cousins, to a man who’s granddaughter i knew through playing in the Vale of Atholl. He was a bagpipe dealer, and bought them for a reasonable price and sold them on for a larger sum of money. The pile of his music, including compositions and arrangements were found in a skip in Dundee. Thankfully someone found them and handed them into the Black Watch museum. Some of these can now be found in the Black Watch book of Pipe music. Now that i know what i know, and there are a lot more in’s and out’s to the story, i understand why my Grandad was so apprehensive in telling me all about Donald. It’s my dream to locate these pipes. It would be a beautiful thing to find them, and would honour the memory of my Grandfather. Who know’s, maybe they’ll make their way home some day. 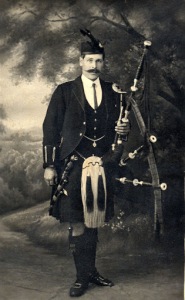 Donald Kennedy. Pipe Major and piper to the Gaelic Society of Perth.

Great grandfather Donald Kennedy chatting to the Duke of Atholl. 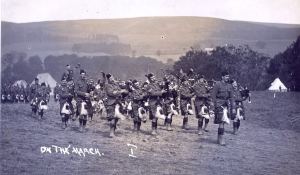